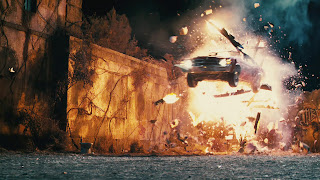 You basically only need to know two things: '1.) Drive Angry is rated "R" by the MPAA for "strong brutal violence throughout, grisly images, graphic sexual content, nudity and pervasive language" 2.) The movie is about a man named Milton (Nicholas Cage) who breaks out of Hell to save a kidnapped family member. While this man is chasing down the kidnappers he is constantly being hunted by "The Accountant" (William Fichtner), whose sole purpose is to catch Milton and bring him back to, you know, Hell.' If you think these two things combined sound like a 50 gallon drum filled with bad-ass and lit on fire, then you really need to give Drive Angry a shot. It isn't a great movie but, then again, it isn't trying to be. What it is trying to be is fun, and it succeeds gloriously.
Remember when Nicholas Cage made good movies and wasn't just a punch-line? This film won't make up for the crap he's been in lately (excluding Bad Lieutenant), but you'll realize that he still has a little awesome left in his tank. He's at his best when he's able to go a little crazy with a role but still play it straight, and this movie needs that kind of crazy to work...especially since Milton carries a gun called "The God Killer" that fires magic bullets. As good a fit as Cage is in the lead it's actually William Fichtner who steals the show. His dialogue is almost completely comprised of one-liners and every one of them hit. The audience I saw it with audibly chuckled every time he was on screen. Both he and his character seem to be having fun in the movie. This really helps to elevate the material above standard genre fare. I should also mention that Amber Heard is surprisingly strong as Milton's reluctant sidekick. She is able to hold her own in a few scenes and shows some promise that she is a better actor than I have previously given her credit for...and she looks great in a pair of Daisy Dukes.
I haven't seen many 3D films. To tell the truth, the only other complete 3D film I've seen is James Cameron's Avatar. This is because the majority of 3D movies that have been released were not filmed with 3D cameras. I really just don't like the idea of converting a movie to 3D after it has already been filmed, and I've heard nothing but horror stories from people who have been subjected to these half-cooked post-conversions. I have no interest in paying an extra $4 per ticket to see a dark and muddy-looking picture. With that being said, Drive Angry was purposely created with the 3D illusion in mind and was shot using 3D cameras. The depth and clarity of the image is fantastic and is a great accent to what is already one hell of a thrill ride. Patrick Lussier knows how to direct a 3D film. The shots are long enough and the transitions between scenes are smooth enough to let you get into the world of the film and look around a bit without feeling like you were kicked in the head when the lights come back up. Although there are definitely a few scenes where images pop out at the audience, the 3D isn't a gimmick that gets overused. Most of the time it is used to add depth to a scene. Once you get into the action it feels more like a ride than a movie.
Drive Angry isn't going to change anyone's life but it is one of the better exploitation films I've seen in a long time. It's a fun movie to just sit back and let wash over you. The 3D used in the film is an experience that can be fun once in a while (only if the movie calls for it), and it's something I can't get at home. I definitely don't want to see every movie in 3D and I still haven't seen a reason to justify the post-conversion process, but I do realize that, when done right, 3D can be whole lot of fun.

The Good The Bad and The Hitcher

Grindhouse was an experiment launched by Quentin Tarantino and Robert Rodriguez to try and rekindle public interest in exploitation films. It consisted of two feature length segements (Death Proof and Planet Terror) released together as one film. While the movie was a bomb at the box office it did pave the way for movies like Drive Angry to exist. It's also a really good movie and is still growing in popularity as more people are exposed to new-age exploitation movies.

Ghost Rider. I think that's all I need to write. The only movie I've ever walked out of. Though similarly themed, Drive Angry is nothing like Ghost Rider. This is important to know. Damn.

Nicholas Cage has had a crazy career. He has a history of eccentric roles and lately he's been in a downward spiral. He isn't the only actor to fit this description though. The way was already paved by Rutger Hauer. Hauer is a living legend of crazy. Go watch the original version of The Hitcher and tell me that man is all there. If I was going to make a list of the most awesomely insane characters I can all but guarantee you this guy would be right up there. It's about a guy who hitch-hikes for the sheer bliss of killing whoever picks him up. That's all he does. Great double feature with Drive Angry.