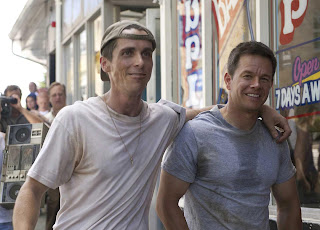 David O. Russel's The Fighter is an excellent movie and easily one of the best of 2010. It excels in spite of, and at the same time because of, the fact that it's told through conventional Hollywood narrative techniques. It is the story of how a man can overcome all obstacles if he has enough determination and heart. It never strays far from the “Rocky” formula, but threatens to beat that film at it's own game.

The Fighter is the true story of “Irish” Micky Ward's journey from living in his older brother, Dicky's shadow to carving out a legend of his own. Micky is a struggling boxer on the brink of never achieving his dreams and toiling forever in obscurity, destined to be known in his home town of Lowell, Massachusetts as the never-was brother of a has-been local legend. Micky (Mark Wahlberg) has the potential to be the fighter Dicky was never capable of being, but he is held back time and time again by his own family. Dicky (Christian Bale) is a crack addict who can't get out of his own way long enough to show up to training sessions with his brother, let alone stay out of trouble with the law. Their mother, Alice (Melissa Leo) is overbearing and tyrannical. She has a primal need to be in complete control of the lives of every man in her family. Always swarming around Alice like a pack of hungry wolves are Micky's seven hideous sisters. They are the demons to Alice's Beelzebub. If anyone steps out of line, or in the slightest bit goes against Alice's rigid plans they hiss and bite until order is restored. On top of his already seemingly insurmountable personal struggles, Micky also has to start fighting, and defeating, the boxers who can get him to the top.
What makes this film rise above other similarly themed sports films are the larger than life characters and the actors who portray them. Christian Bale owns this movie. That is a factual statement. About 20 seconds into the film I forgot I was watching Christian Bale. He becomes Dicky Eklund in every nuance and mannerism; however, he isn't alone. The Fighter is full to the brim of fantastic actors. It's almost as if He, Mellisa Leo, and Amy Adams as Charlene, the bartender-cum-love interest, are playing a game of tag for control of the film. All three are performing at the best of their abilities and will all be recognized this awards season. It's so easy to heap praise on the supporting cast that it's easy to overlook Mark Wahlberg. Wahlberg's choice to stay understated throughout the film is a calculated one, rather than a lack of ability or range. He is the axis that this world of crazy rotates around. He acts as a sounding board for everyone else in the movie. He is there to catch the ball and throw it back whenever one of the other actors loses control of it. When this kind of role is played right it almost seems as if the actor is doing nothing. Without this character, and modest performance by Wahlberg, the film would careen out of control.
Director David O. Russell certainly can't be overlooked for his cinematic prowess. He brings the same unique style and fluid camera that he brought to films like Three Kings, but never lets visual flair overpower the story. There are some shots that stand out and make you aware that there is a fair amount of camera trickery going on, but for the most part you're so immersed in the gritty world he creates you get lost in the film. This is the mark of a maturing director. I'm looking forward to where he goes next. The Fighter is a big win for everyone involved.

I was racking my brain trying to think of three boxing movies that would be perfect examples of each category. I believe I've done it. Today, "The Good" is Michael Mann's Ali. For some reason this film has faded from the collective memory much faster than it should have, but don't let that fool you. Ali is a great film and a perfect double feature with The Fighter. Both Marky Mark and The Fresh Prince started their careers as rappers then slowly transitioned into Academy Award caliber leading men. Both films have absolutely knockout (damn puns) performances by supporting actors: John Voight in Ali and Christian Bale in The Fighter. The movies each have a feel-good quality: you really believe that determination and heart can overcome all odds. Finally, each film signifies a shift in tone and style for each of the directors. Ali was the film in which Michael Mann started experimenting with digital cinematography. This aesthetic has since become a trademark for the director as he has used digital cameras in each of his subsequent films. As I said in my review, The Fighter is David O. Russell's first film to successfully blend his visual style with a complete and traditional narrative. Only time will tell if he will walk the same path as Mann.

Teen Wolf, Too is quite possibly the worst boxing movie ever made. Yes, it might be a stretch to label a sequel comedy movie about a teenager turning into a werewolf as a "boxing movie", but it's still a complete disaster and that fills my purpose. The premise for the movie is just as bad as the first one, but with 100% less Michael J. Fox. It's a train-wreck of a film that can definitely be enjoyed ironically as long as you don't watch it alone. If you like heckling bad movies then this is a winner.

The movie rescued from the depths of obscurity today is Walter Hill's Undisputed starring Wesley Snipes and Ving Rhames. Rhames plays a boxer who is sent to prison. Snipes plays a boxer who is already in prison and just happens to be the long running champ of the prison boxing world. I don't want to spoil anything for you here...but they fight. Undisputed is a "B" movie that has the benefit of knowing exactly what it is and it swings for the fences. Walter Hill knows intimately how to make this kind of movie work and nobody makes it work better. It's lean, it's fast, and it's awesome. If you aren't familiar with Hill's work this isn't a bad place to start...as long as you follow it up with his masterpiece, The Warriors. (All films except The Fighter are available on DVD. The Warriors is also currently available on Netflix Instant Watch.)