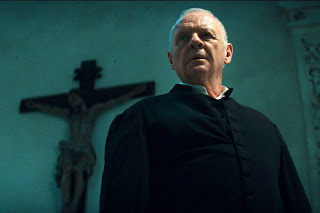 This weekend I saw The Rite starring Anthony Hopkins. It's about a young priest (Colin O'Donoghue) who entered the seminary for the wrong reasons. If he drops out he owes the church bales of cash so he agrees to take a class on exorcism in Rome. Soon after he arrives he meets a weathered exorcist. Since this exorcist is played by Hopkins you can already start guessing how this story is going to unfold. (Hint: He isn't really known for playing lovable clowns.) What the title of the film should have been is The Wrong...get it? Anyway the movie was more forced, awkward, and disappointing than that joke.


Let's start off with what worked. Overall the cast is well above average. Hopkins is great as always, but the standout in the film is the actress who played the possessed pregnant girl, Rosaria. She is the focus of a good portion of the film and whenever she is on screen she keeps it interesting. This is also why the film stumbles and ultimately leads to disappointment. Without venturing into spoiler territory, up to a certain point the movie is actually very good. It builds slowly and steadily, working to create a creepy and involving atmosphere. Then, about halfway through, the movie you've been watching and enjoying abruptly ends and turns into something very different. A bad kind of different. This shift is what hobbles the film and makes the end result so upsetting.
It's like this: Watching a uniformly bad film is like desperately wanting a puppy for Christmas. Christmas morning rolls around, you look under the tree, and there is no puppy. It's unpleasant, but you'll recover. Watching a film like The Rite is like looking under the tree and finding a collar and dog food. Then all of a sudden your parents come carrying a dog kennel. You look in the kennel and find...a stuffed dog. This breaks your soul.
The shift I'm referring to is when the film suddenly stops being a superbly eerie drama and tries to become a horror film. This doesn't work at all. It gives you the feeling that the movie has no idea what it wants to be and it collapses in on itself and becomes a parody by the end.
The movie either quoted or took jabs at William Friedkin's brilliant The Exorcist several times. If you are going to invoke a classic film, perhaps the best in it's genre, you better make sure you bring your “A” game. If not, you will only succeed in reminding the audience that there is a much better movie that they should be watching.
The Good, The Bad, and the Hopkins:

If you want a truly great exorcism film, you needn't look further than Friedkin's The Exorcist. It really just doesnt get better than that. As the 2004 prequel shows, however, things can get much worse. Renny Harlin's Exorcist: The Beginning isn't just a bad movie, it's possibly his worst...and he's the guy who made Cutthroat Island. If you're unfortunate enough to have already seen The Rite then Exorcist: The Beginning is exactly what you need to realize how bad it could have been.

To see Hopkins truly at the top of his game check out Magic. The movie stars Hopkins as a hopelessly deranged ventriloquist whose dummy may or may not be the one really in control. I just saw this gem for the first time recently and I couldn't have been more pleasantly surprised. The tone of the film is what The Rite should have been. Not necessarily horror, but creepy as hell. One scene that immediately comes to mind has Hopkins trying to teach Ann-Margret a mind-reading card trick. It doesn't exactly go according to plan. Hilarity does not ensue. (All three films are currently available on DVD.)

Email ThisBlogThis!Share to TwitterShare to FacebookShare to Pinterest
Tags: Horror, Review, The Rite