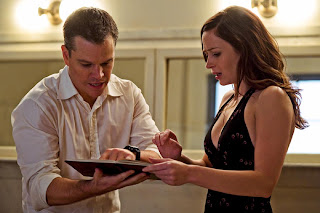 Matt Damon has quickly become one of Hollywood's most prominent and consistently enjoyable actors. It doesn't seem to matter if he's a leading man (the Bourne trilogy) or if he's in a supporting role (True Grit), he just seems to have a knack for seeking out good movies. The Adjustmen Bureau is no exception.
At it's core The Adjustment Bureau is a romance movie. Matt Damon is a young politician who appears to be rising through the ranks at record pace. Emily Blunt is a ballet dancer with a wild and carefree attitude. They meet. They fall in love. I'm sorry I just spoiled that bit for you. I'm sure you didn't see it coming. Where the meat of the story lies, and what makes it different from other movies of this genre, is in how the two are kept apart for the next hour and forty minutes.
The movie is based on a short story by Phillip K. Dick. If you're at all familiar with his work, you know that this can't just be the standard "boy meets girl,boy loses girl,boy gets girl back in the third act" fare. Dick is responsible for the stories behind movies like Blade Runner, Total Recall, and Minority Report. While The Adjustment Burueau is nowhere near as sci-fi heavy as the majority of his other stories, it is still a prominent element. The antagonists in the film are a group of men (or are they?) whose job it is to keep order and make sure everyone stays on the right path. They have a number of ways of doing this, not the least of which is moving objects with a flick of the wrist. Romance, meet Sci-Fi. Play nice.
This is definitely is a well crafted and acted film. It is able to balance both genres without becoming hokey or fake. Though there is plenty of humor in the story, the sci-fi elements are never played for laughs. This is important because there are so many things in the movie that have the potential to turn the whole affair into a campy, silly mess. Both main characters have a genuine chemistry in the film and the humor comes from how they interact with each other, rather than a series of jokes. You understand how they develop the bond that they do and it never seems forced. This makes for genuine tension and a compelling story when something abnormal comes between them.
The Adjustment Bureau makes for a great date movie. The love story will keep her involved and the sci-fi overtones are more than enough to keep him entertained. The best way to describe the movie is, "crowd pleaser". It has a surprisingly light tone, it moves very quickly, and it doesn't try to get overly smart or cocky with a big twist ending that is so popular these days. It's a good night out at the movies. B+


The Good, the Bad, and the Dark

Big Fish is the last good movie made by Tim Burton. It was made in a time when he let his imagination wander and stopped trying to be so damned dark and "Tim Burton"-esque. Like The Adjustment Bureau it's about a young man who falls head-over-heels for a young woman. He sees her for only a fleeting moment and vows to find her and marry her. In order to do this he must travel through a fantasy land of giants, witches, and werewolves. Even though it's much more steeped in fantasy than The Adjustment Bureau, both movies are terrific examples of successfully blending love stories with sci-fi/fantasy.

I really need to stop picking on Nicholas Cage. I really am a fan but it seems like he's made three bad movies for every good one. The movie on the guillotine today is City of Angels, the putrid American remake of Wim Wenders' classic Wings of Desire. Cage is an angel who decides he needs to be with Meg Ryan so much he chooses to become mortal. He turns human, she dies. I just saved you a few hours. This is a perfect example of how to mess up a movie by mixing genres...and by using a Goo-Goo Dolls song as a centerpiece.

Alex Proyas' Dark City is one of the most criminally under-seen movies of the 90's, eclipsed by the release of the tonally similar The Matrix. If you want to see something darker, harder, grittier, and infinitely more sci-fi than The Adjustment Bureau, but with many of the same story elements, you need to check this out. A city is being controlled by a group of men (or are they?) who can freeze time and move objects with a flick of the wrist. Sound familiar? Make sure to check out the Director's Cut for maximum enjoyment. (All movies currently available on DVD. City of Angels also available on Netflix Instant Watch...but be warned.)
-Jeremy
jrperry@iamcinephile.com
Written by Jeremy R. Perry