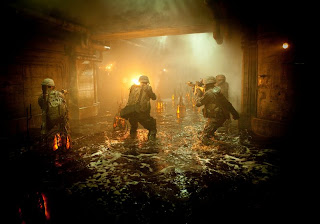 The feel of Battle: Los Angeles is exactly what it appears to be in the trailer: a mixture of Independence Day and Black Hawk Down. In every other aspect it is nothing like either of those films. It's far from an original concept, there are huge inconsistencies in both direction and structure, and most of the dialogue is clunky and expository at best. I guess you could say the film has it's flaws. With that said, what boggles my mind is that I not only don't hate the film, but I really like it.
What really kills Battle: Los Angeles is the awkwardness of direction. Throughout the film you never get a clear sense of the space that the characters are in. The camera keeps cutting between characters so quickly, you're never quite sure where they are in relation to each other. I understand why this was done but it doesn't really work. Quickly-cut, shaky-cam shots can make you feel like you're in the movie just like one of the team. They get ambushed and everything gets really frenetic. You don't know what is going on because the characters don't know what is going on. It looks cool on paper and does work really well in the big action sequences but it gets confusing really fast everywhere else. On top of this, the film suffers from an inability to accurately depict the passage of time. There were several instances throughout the movie that I was completely taken out of the story because I had no idea what the characters were doing or how they got there. One moment that sticks out in my mind is a sequence where the team is deep behind enemy lines surrounded by the darkness of night. They're trying to get to a specific location that is "5 klicks" away from where they currently are. The camera pans left and they're there (apparently not running into a single problem on their travels). They go inside and do their thing but when they come back out it's broad daylight. This all happens within a 10-minute period. There is no possible way it took them all night to do what they did but but it was time for another huge battle sequence... and you can't really see that in the dark.
An aspect of the film that works both for and against it is the story. Although there are a few sweeping shots of widespread chaos and destruction, the movie is basically about a handful of main characters and how the threat of human extinction affects them. The characters are given backstories but none of them are fully explained or they are quickly forgotten. This is either due to poor writing or an attempt to make the story feel more urgent... it doesn't really matter which.  What you do get is a group of characters whose survival matters. Since you only have 8 or so characters, when one of them bites it, you feel the impact on the rest of the team. The crew in this film aren't as fleshed out as the crew in Aliens but the idea is similar. Actually, all of the ideas borrowed from other films (of which there are quite a few) don't work as well in Battle: Los Angeles but they are put together in new and very interesting ways. I like the idea of classic, military-style combat with an alien enemy. For lack of a better word, it is really "cool" to watch.
Aaron Eckhart is the best thing that could have happened to this movie. He plays his role with such bravado and determination, it's really hard not to root for him. He is John Wayne from Stagecoach. He needs the group and helps them on their journey but, when things start to turn sour, he isn't afraid to take matters into his own hands and save the day on his own. He also has an incredible ability to deliver the cheesiest cornball dialogue and make it sound like poetry. There is a moment in the film where he gives the team a pep-talk and shines a little light on what happened in his past. It should have been a cringe-worthy moment, filled with rising violins, but somehow it comes off as sincere.
In spite of the negative aspects, one thing I could never say about the film is that it's boring. Battle: Los Angeles moves at a break-neck, "take no prisoners" pace. The battle sequences are incredibly entertaining and evenly spread throughout the movie. If you're already interested in the film, this is all you really care about anyway. If you want to see a move about marines with assault rifles kicking ass (and getting their asses kicked), just go see it and don't worry about critical analysis over whether or not it's a "good" film. It's a typical B-movie, more concerned with blowing things up than developing proper character and plot. It's a hard movie to be completely objective about. Unlike Drive Angry (which was obviously played for laughs), I really think the intent of Battle: Los Angeles was to be a gripping action/drama. Intent doesn't matter though, and the film succeeds in spite of it's flaws and ham-fisted direction. It isn't the next sci-fi classic but it is good enough to appease fans of the genre and whet their appetites for big summer movies like Super 8. B


The Good, the Bad, and The Thing

You want to see a well-made, original sci-fi film? Check out District 9. Not only original in plot and alien design, but shot in a very immersive fashion. The movie starts off as a mocumentary and seamlessly shifts into a full-blown alien extravaganza. The movie launched the careers of director Neil Blomkamp and actor Sharlto Copley, and introduced the world to "prawns". As entertaining as I thought Battle: Los Angeles was, District 9 is simply a much better film.

What is worse than an invading alien species whose only goals are for global domination and the destruction of all humans? Invading aliens whose only goal is to sell us products from major corporations like Coca-Cola and McDonald's. Yeah, I'm looking at you, Mac and Me. Not only inspired by movies like E.T., but can easily classify as a blatant rip-off just to sell cheeseburgers. Now, if you'll excuse me I need to go grab some Reese's Pieces.

Listen up, aliens. If you're really hell-bent on world domination, just watch John Carpenter's The Thing. Coming to earth with the ability to perfectly replicate a human is fool-proof... just make sure Kurt Russell isn't around. Invasion of the Body Snatchers kind of did this twice before, but The Thing is simply a better movie that way too many people are unaware of. Fantastic practical special effects, masterful direction, and iconic acting put it in the running for not only the best remake, but for the greatest horror film ever made. If you haven't already seen this movie you'd better do it before someone you love finds out. Consider yourself warned. (All movies currently available on DVD. District 9 and The Thing  are also available on Netflix Instant Watch.)
-Jeremy
jrperry@iamcinephile.com
Written by Jeremy R. Perry