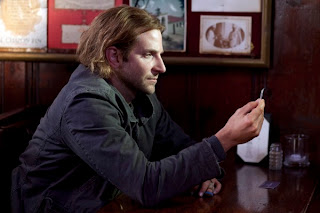 Limitless is an ultra-stylistic thriller directed by Neil Burger. Don't feel bad that you don't recognize that name as there really was no reason to before this film. The only other movie he's made that has reached any kind of a mass audience is a somewhat forgettable flick about a magician called, The Illusionist. In many ways Limitless is also a film about magic, albeit in a completely different form. Burger manipulates the images, the story, and the audience with such style and flair he makes the film unstoppably entertaining, regardless of how flimsy the plot occasionally gets.
The story of Limitless is a relatively simple one. Eddie Morra (Bradley Cooper) is a down-on-his-luck writer. He has no money, his girlfriend is leaving him, and he can't write a single sentence. He is doomed to spiral forever downward until he crashes in a ball of flame. Then, by chance, he runs into an old acquaintance who casually offers up the solution to all of Eddie's problems in the form of a single, clear pill. This pill holds the power to unleash the full potential of Eddie's mind and crank his brain to 11. Of course, in solving all of Eddie's problems, the drug creates a whole series of new and much more serious circumstances. Everyone knows that all drugs have side-effects. What ensues are two fast and furious hours that champion style over substance, but the movie makes you so high that you simply don't care.
Don't get me wrong. This isn't a "mindless thrill ride" that holds you hostage with pretty pictures cut to a fast-paced rock-infused score, but it doesn't exactly have the intricately woven plot structure of an independent art film to lean back on either. What it is is a  slightly smarter-than-the-average-bear Hollywood thriller. Yes, there are pieces of the film that don't add up or simply disappear. The "murder" subplot is a great example of this. There is no clear resolution, but your mind can fill in what the screenplay leaves out. I'm not making excuses for the film either, I just feel that a film that is designed like Limitless is free to take a few liberties with plot holes. It is intentionally molded and tweaked to be a certain kind of film and appeal to a specific audience. This doesn't mean that you should cut a movie slack or give it an "A" for effort. However you do have to judge it on it's own merits and for what the ultimate goal of the film is. Limitless is meant to assault your eyeballs while telling a clear, coherent story and it does this well.
From the opening credits to the closing credits you are hit with a full arsenal of camera trickery and computer effects. It has all the swagger and confidence of a movie like Fight Club, albeit with a much lighter story structure and atmosphere. One great effect that is used over and over throughout Limitless is an "infinite zoom". It helps to illustrate the main theme of the movie while throwing down some original and striking visuals. It is one of the many visual effects used to put you in Eddie's mind. Eddie sees things as limitless, and so do you. Another example of one of these effects is the manipulation of color schemes.  When Eddie is normal, the world around him is fuzzy with muted colors. Eddie pops a pill and his world gets brighter, clearer and more vibrant. You see the world as he sees it.
Bradley Cooper proves his mettle in this film. He plays both sides of Eddie Morra effortlessly. The disheveled, struggling writer is a stretch for him, given the roles he's known for, but he is very believable here. The second he turns into the cocky smart-ass charatcer he is known for playing you're totally hooked and can't wait to see what he does next. It's a total Jekyll and Hyde transformation.
The supporting cast is used perfectly as well. Anybody familiar with Robert De Niro knows he isn't remotely the same actor he was 30, 20, or even 10 years ago. He has devolved into mostly playing caricatures of his classic roles or hamming it up for the camera in cringeworthy excess. You also know that every now and then he is still able to pull out a little of his former self. In Limitless he is perfectly underused. He isn't given a quirk to play with or an abundance of time to play with the dialogue. He is a straight-forward, ruthless business man, and he fills out the role nicely. The big surprise of the cast is from a Welsh actor named Andrew Howard as the dubious Russian mobster, Gennady. I don't want to give too much away, but his character is perfectly unhinged and he has a few opportunities to chew up some scenery.
All-in-all Limitless is solid entertainment. It's the kind of movie you want to keep watching. There are boundless adventures the characters can find themselves in and you want to see what will come next. Bradley Cooper is solidly on his way to becoming a household name, and Neil Burger is a director you certainly haven't heard the last of. I wouldn't be surprised if we see big things from Burger in the future. B+

The Good, The Bad, and the Hyde 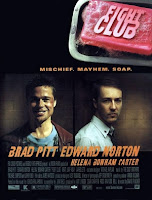 While Fight Club and Limitless share a number of stylistic similarities, not the least of which is a main character with alternate personalities, they are in totally different leagues. David Fincher's Fight Club is a modern classic and proof that Se7en wasn't just a fluke. It not only experimented with computer aided graphics, but with totally CG shots (something that has become a trademark for Fincher). It is also an example of a movie that doesn't ditch substance for style. It's heavy and unrelenting. An examination into the minds of aging Generation X-ers and a world on the brink of the 21st century. And it stars Meatloaf.

It pains me that the first Paul Verhoeven movie that makes this list goes in the "bad" category. Verhoeven is a master of modern satire and rarely missteps. Hollowman was more than a misstep, however. The utter critical failure of the film has (currently) killed his American filmmaking career. Hollowman is an updated version of the classic Invisible Man story starring Kevin Bacon. Filled with groundbreaking special effects it seemed a perfect breeding ground for Verhoeven's subversive brand of filmmaking. Somehow everything just falls flat, though. Bacon turns invisible, turns into a sex fiend, then goes ultraviolent and starts killing things. The movie could have been a statement about the importance of material things in the modern world, or even an examination on cinema and visual art as a whole. Instead, it just sucks. 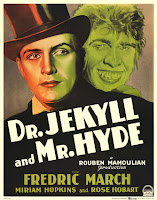 Reuben Mamoulian's Dr. Jekyll and Mr. Hyde is the first "talkie" version of Robert Louis Stevenson's classic tale of good vs. evil. In my opinion it is also far and away the best adaptation. It is filled with extraordinary effects for it's time. On top of the transformation sequences, the tracking shot at the opening of the film is one of my personal favorite moments in cinema. Pure movie magic. Frederic March excels in the role and completely deserved the Academy Award he won. The film is also a great example of what kind of sexual situations or innuendo you could get away with in pre-code Hollywood. Don't let the fact that it's 80 years old keep you from checking this out. Brilliance is brilliance, regardless of age.