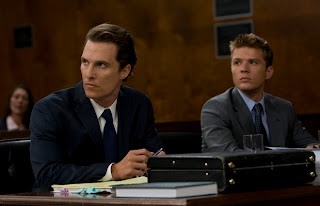 Sometimes you're pretty sure you know what you're going to get before you walk into the theatre. From the trailers, The Lincoln Lawyer looks like a standard legal thriller with an oddly miscast Matthew McConaughey. I say oddly miscast because it didn't look at all like a movie about a surfer dude with a penchant for taking his shirt off, who inevitably gets the girl, loses her, then gets her again. What The Lincoln Lawyer (and McConaughey) proves is that you can't always judge a book by it's cover. Without a single surfing scene to be found, the film is smart, incredibly well-cast, and capably directed.
Mick Haller (McConaughey) is a defense lawyer. His office is the back seat of a chauffeured Lincoln Town Car. Why is his office in a car? Because it's cool and keeps the story in constant motion. He has a chauffeur because he has a bit of a drinking problem. This is a fantastic set-up for a hard-boiled crime story. Seventy years ago it would be Humphrey Bogart in the back of that car. Haller is quickly tasked with defending rich kid, Louis Roulet (Ryan Phillipe) in an attempted rape/murder case. It's impossible to get into any more detail without stumbling into spoiler territory because it is a standard crime thriller. There is a certain structure this type of film has to have. Making a movie like this is like making a cake. The story is the pan. Of course it has to be solid enough and big enough to hold the cake and withstand the temperatures of the oven, but it's always going to be a cake pan. You know what it looks like. It's what you fill that pan with that makes something tasty. You fill a story like this with solid actors and an ambitious director and you're going to turn out a delicious film that plays at the top of it's genre.
Matthew McConaughey excels in the lead role. He finally delivers on the promise of his performance of 1996's A Time to Kill. McConaughey's Haller knows he's a sleazy, sweaty, scum-defending attorney, but he also knows that he is great at his job. McConaughey brings just the right amount of charm and smart-assery to the character to endear him to the audience and make him a riveting character. The Lincoln Lawyer gives him a cast full of veteran character actors like William H. Macy, Marissa Tomei, Ryan Phillipe, John Leguizamo, Michael Pena, Bryan Cranston, and Micahel Pare to play off of and in return he gives what is possibly his best performance to date. The aforementioned supporting cast are all perfect in their roles as well, especially William H. Macy. His comic timing is pure gold and helps to bring a sense of levity to a film that occasionally gets very dark.
Director Brad Furman does a bang-up job on his first major release. The film opens with a 70's-style opening credit montage, then it hits the streets with a shaky-cam tracking shot following our main character through the narrow hallways of an L.A. courthouse. The film eventually evens out and the camera movements stop screaming "look at me" and start to serve the atmosphere of the story. It is the exact opposite of a film like Limitless (also in theatres this weekend), which is all flash and pomp. Furman knows he has a solid story on his hands. The more he can bring the audience into his vision of L.A., the faster he can run with the story and build the tension to the level the audience is craving.
The Lincoln Lawyer is a very welcome surprise. I love courtroom thrillers. It has been so long since I've seen one that moves with such confidence and includes twists that are not only satisfying, but they actually make sense. If you don't make it out to the movies very often, this is one I would wholeheartedly recommend. It's the kind of film made even more exciting by watching it with an audience. I've never read any of the novels in the Mick Haller series, but knowing that there are other stories makes me excited that they could someday be on the big screen. If that day comes, I'm there. A-

The Good, The Bad, and the RDJ

Otto Preminger's Anatomy of a Murder is probably one of the best courtroom drama's ever made. It stars Jimmy Stewart as a jazz loving defense attorney tasked with defending an army lieutenant in a murder trial. There are a few similarities between this film and The Lincoln Lawyer, other than the obvious legal setting. It's a good choice for a double feature or, if you're unfamiliar with older films, a great place to discover the genius of both Stewart and Preminger. It also has an incredible opening credit sequence by the inimitable Saul Bass.

Peter Hyams is a director that seems to be great at messing up some potentially great movies. I'm still insanely curious at how The Sound of Thunder would have turned out had it not run into insurmountable financial and creative troubles. The films of his that bothers me the most, however, is hopefully also the last film he will ever make. The film is the remake of Fritz Lang's Beyond a Reasonable Doubt. There is absolutely no reason why this film was remade. The original wasn't even that good. If a director like Fritz Lang couldn't do any better with the film I have no idea what a hack like Peter Hyams thought he could do with it. It's the kind of film where the twist at the end comes out of nowhere, punches you in the throat, and laughs at the faces you're making while you're desperately trying to inhale some sweet, sweet oxygen. I hate this movie.

Gingerbread Man isn't a great movie, but there is no reason for it to be as obscure as it is. It's a tight legal thriller by legendary director Robert Altman. Like The Lincoln Lawyer the movie has an excellent cast including Kenneth Branagh, Robert Downey Jr., Robert Duvall, Daryl Hannah, and Tom Berenger. It's a great movie for a Sunday afternoon.