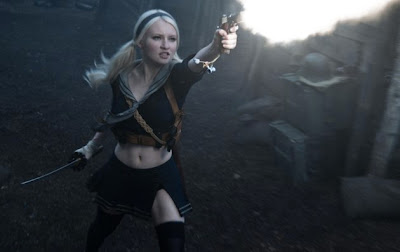 
The Good, the Bad, and Going "Nowhere Fast"

Edgar Wright's Scott Pilgrim vs The World is another example of a studio giving free reign to a director who has a unique vision. It is a total box-office failure, but an absolute success on a creative level. It's fun, fast, and completely surreal. Unlike Sucker Punch, though, it also makes total sense and tells an involving and coherent story. It's downfall is that it is a movie made for a pretty specific audience, much like Sucker Punch. If you are part of this target audience it's a movie that has to be seen to be believed. You have definitely never seen anything like it.

Transformers was surprisingly great. Michael bay has made some great movies (The Rock, Bad Boys II) and he has made total trash (Pearl Harbor). I was afraid that it was the wrong Michael Bay that was making this movie. I was glad to find that my fears were unfounded, and anticipated how great the inevitable sequel was destined to be. Enter, Transformers 2. This is an example of what happens when a studio gives a director carte-blanche and he falls flat on his face. He took all of the elements of the first movie that worked, threw them away, and instead added scenes of dogs humping things and the hero's mother getting high on pot brownies. Oh yeah, and he gave the robots testicles.

Streets of Fire was supposed to be the first in a new series of action movies. It was supposed to make Michael Pare a leading man and a household name. It was going to make director Walter Hill one of the big shots in the industry. It didn't do any of this. The audience just wasn't ready for it. It's like Sucker Punch in many different ways. It's a "Sci-Fi Action Musical", it's based in a hyper-stylized time period that doesn't seem rooted in the future or the past, and it's kind of a mess. It is so much damn fun, though, and I can promise you that you haven't ever seen anything quite like it. I discovered this movie somewhat recently and I completely embrace it. Another "almost masterpiece" in Walter Hill's career.