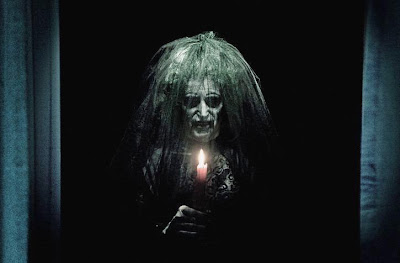 Insidious is the new horror film from Saw masterminds Leigh Whannell and James Wan. With that series they changed the face of modern American horror films, for better or worse. The "Torture Porn" movement those films ushered in is characterized by extreme graphic violence, copious amounts of blood and gore, and sociopathic human villains instead of fantastical or supernatural forces. The goal of this sub-genre is to shock and disgust rather than frighten. Insidious turns all of that on it's head. A throwback to the horror films of the 70's and 80's, Insidious is full of homages to the classic "haunted house" films of the era. Although it is ripe with genuine scares and laughs, Insidious ultimately succeeds in reminding the audience how much fun seeing a scary movie used to be instead of breathing new life into the genre.
Outlining the plot of Insidious would be redundant. It's a haunted house movie. A family moves into a house, house is haunted, and creepy happenings...umm...happen. What is slightly different about this film is the quality of the acting. Both Patrick Wilson and Rose Byrne do a bang up job of selling even the cheapest scares in the flick. There are moments where they are actually struggling to more sharply define their characters in a film that shifts gears and ultimately turns into a completely different picture at the halfway mark. What starts as a slow burning and dead serious first half crumbles to make way for a more tongue-in-cheek wildly outrageous second half. All of the secondary characters introduced in this second half are either deliberately quirky (the two paranormal investigators) or blatant copies of characters from other films (the medium that comes to inspect the house). This all fits the throwback style of the film, but in throwing out so many nods to so many disparate movies, a good amount of plot gets lost in the shuffle. Some story threads just drop away, never to be heard from again.
What I find noteworthy about the film is the total lack of blood and gore from a filmmaking team that has made their name on twisting and tearing human flesh in directions previously unseen. Aside from a few well placed expletives it is a surprisingly clean movie. Wan uses odd angles and points of view to put the audience on edge, much like Kubrick did with The Shining. I should clarify that I am in no way comparing James Wan to a master of cinema like Stanley Kubrick, but if you see the film you'll know what I mean. Of course the movie also relies on underlit settings, quick editing, and sudden bursts of loud noise to achieve some scares, but there are definitely a few unsettling images that I won't get out of my head for quite some time. The seance sequence in particular is fantastically executed, and I don't think the cliched "Hey, I heard a noise downstairs. Let me get a flashlight and check it out alone" will ever fail to get a response from an audience.
Insidious isn't going to change the current landscape of horror cinema, but it is certainly a step in the right direction. I would much rather see a film like this than another Hostel or, worse yet, another Texas Chainsaw Massacre remake. Insidious has some novel ideas and was made with the best intentions but, in the end, fails to actually be anything but a zerox copy of a good horror film.


The Good, The Bad, and the Piano That Eats People

Poltergeist has to be the reigning king of family-friendly haunted house movies. Wan and Whannell clearly have the same opinion of the film and based the majority of Insidious on this movie. Allegedly directed by Texas Chainsaw Massacre director Tobe Hooper (but more likely made by Spielberg himself), Poltergeist barely shows any signs of its age. This is a rare feat for any horror film and a sign of great filmmaking. The bottom line is this: If you go into Insidious without having seen Poltergeist and you really like it you're in for a hell of a treat later.

Picking out a bad horror movie is like shooting fish in a barrel. It's the only genre in which none of the technical aspects of the film have to be any good for the movie to work. Horror movie fans are bound to like anything even remotely entertaining. For some people the worse they are the better. Enter Nine Lives. This movie is an absolute trainwreck of a haunted house movie. It stars Paris Hilton and it's so bad that you aren't even satisfied when she bites it. I'm not really a horror geek, but if any of you out there are you should give this one a spin and see if you can stomach it. I dare you.

If you like haunted house movies, crazy Japanese horror, or drug fueled 70's experiments then Hausu (1977) is a movie you desperately need to see. Its about a group of schoolgirls who decide to stay at one girls' aunt's house for summer vacation. Just so you get a sense of how spectacularly insane the movie is, the girl's names are: Fantasy (the pretty daydreamer), Kung Fu (the athletic one), Prof (the smart one), Mac (the constantly hungry one), Melody (a musician), and Sweet (the good little housewife one). I gaurantee you that the images in this movie will be cemented in your brain. I can't recommend this highly enough. (All movies available on DVD. Poltergeist and  Nine Lives available on Netflix Instant Watch.)