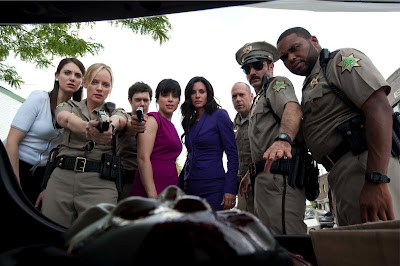 When the original Scream first hacked and slashed it's way onto the scene it was something new, fresh, and original. It was a horror movie poking fun at horror movies filled with a cast of characters totally familiar with all the tropes and traps of horror movies. It spawned a wave of self-referencial scary movies (I Know What You Did Last Summer, Urban Legend) and changed how slasher films were constructed. That was 15 years ago. Kids who were still perplexed at the concept of walking and talking at the same time back then are now old enough to see Scream 4 in the theatre. Is the Scream franchise still bold enough to be relevant? The answer is a resounding, "Well, sort of".
First and foremost, Scream 4 is not a horror movie. It is a comedy with a few horror elements. Right from the opening sequence you know that you're in for a different experience than the other films. It shoots barbs at Saw, the Torture Porn genre, neverending chains of sequels, remakes, and self-referencial horror films (like Scream itself). This is all before the opening credits.
The major focus of Scream 4 is reboots and remakes. Of course, in being a reboot itself, it becomes some kind of super meta-horror film, with tongue firmly planted in cheek. After 11 years without any disturbances, Woodsboro again looks like a quiet suburban town. Then Sidney comes back to town. Suddenly, knife and chest become best friends again and teens start dropping in rapid succession. All of these teens also happen to know everything there is to know about horror films and their subsequent remakes and, therefore, know that the "rules" have changed. I can't remember if it was the fourth time a character used the word "meta" to describe the situation, or the sixth time a character let everyone know that the new "rule" is that anything that has ever happened in a horror movie in the history of cinema was the new "rule", but it got stale somewhere. I'm watching the film. I don't need the characters to provide color commentary on what I'm seeing. I understand how oh-so-clever the movie is without telling me repeatedly.
This movie makes me feel old. It makes me feel old because I hate all of the new characters and a sure sign of getting old is hating teenagers. They tweet, text, and blog their way through the story, each one constantly trying to out-hipster the other. It really made me long for the days where characters in horror movies got drunk/high, got naked, had sex, then got real scared when people started getting their lungs ripped out through their mouths. Nobody in the movie is ever scared of anything. All of their friends getting bumped off seem more like roadblocks in their social lives then the loss of a human being. "Oh no, we might have to cancel our movie marathon because (Blonde #1)'s bedroom was repainted with her own blood."
The movie is entertaining enough, aside from the characters' hipper than thou swagger and the constant trashing of all things horror. There are moments when the film stops winking at the audience just long enough for us to get a glimpse at a real scary movie. Then of course is doubles back on itself and lets us know how stupid that part just was. It's almost as if Kevin Williamson (the screenwriter) is mocking you for liking his movie. In order for a slasher movie to work, people have to do some stupid things. If, instead of running upstairs to certain doom, the characters stood their ground and grabbed shotguns, the movie would be 15 minutes long and even less scary. By over-analyzing every aspect of the genre, much of the thrill gets sucked out. You can't be scared if you're constantly being told what will come next.
As a horror spoof the movie works very well. There are some truly inspired sequences that get real laughs...even if it means losing some good scares. The opening sequence and the last 20 minutes of the film are great. Almost everything that happens in-between tries as hard as it can to keep you from enjoying yourself. I can say with absolute certainty that it's the best movie Wes Craven has made in years, but I can't say that it was worth the wait.


The Good, the Bad, and the Fuzz

If what you're looking for is an old school slasher film to clear your head from all of this spoofy nonsense, then look no further than Black Christmas (1974). The original slasher movie that started it all and the first to use such now cliched tropes as "the killer is calling from...inside the house!!!". It's almost Christmas break and a group of sorority girls keeps getting calls from a sex fiend. Through POV camera shots we quickly see that this fiend wants to do more than breathe heavy on the other end of the phone. Great tension, perfect faceless killer, and pre-crazy Margot Kidder make this a must-see slasher.

Where was the low point in Wes Craven's career, you ask? That would be Cursed. Cursed is a werewolf movie that is not only the worst werewolf movie (a sub genre I love) I've ever seen, but thick in the running for worst movie of the past 10 years. The all-CGI effects are laughably bad, there is almost no violence, and the plot doesn't make a lick of sense. How in the hell do you make a werewolf movie and not even show a transformation sequence. There are certain notes you have to hit in even the shittiest song, Wes. You seem to have missed them all.

While writing this review I couldn't get Hot Fuzz out of my head. If you've seen it then you'll remember that there was a pretty prevalent slasher theme running through the otherwise comedic film. Scream 4 feels very much the same way. You aren't scared at all when the killer shows up, it just gives you a little change of pace in between laughs and a direction for the story to go. Hot Fuzz is an infinitely superior film in almost every aspect though. Both movies make reference to heaps of other films, but they do it in totally different ways. Scream 4 spends most of its running time pointing out how cheesy and cliched the movie you're watching is, while Hot Fuzz is telling you over and over again how awesome and badass the movie you're watching is. Which would you rather see?  (All movies currently available on DVD. Black Christmas is also available on Netflix Instant Watch...watch it now.)