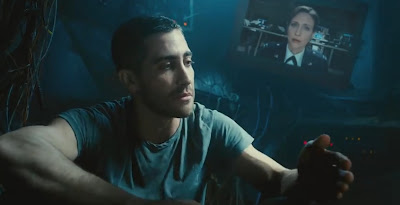 For me, one of the hallmarks of a great film is that you can get lost in it. You're not just entertained, forget you're broke, or distracted from the fact that your job sucks for two hours, but you forget you're even in a theatre watching a movie. It completely envelopes you for the duration of it's running time. You're actively involved in the narrative and feel like you have a stake in what happens. I hadn't seen a movie like this for quite a while...until I saw Source Code.
If you haven't already seen the trailer for Source Code, don't. It's not particularly well done and borders on confusing. It might even be a little misrepresentative. At it's core it is a science fiction film, time shifting/alternate reality is a factor, and a train does blow up real good, but it is so much more than that. There is a bomb on a train and it is up to Army captain Colter Stevens (Jake Gyllenhaal) to find the bomb and uncover the identity of the bomber. You come into the film just as disoriented as Colter. He doesn't know who he is or what he's doing. He finds out, right along with you, what is happening piece by piece. This is a fantastic way to frame the film. With the main character just as unaware of what is going on as you are, you identify with him and feel for him very quickly. There is no exposition or back story up front. Intead you're thrown straight into the plot.

Everything about Source Code feels like classic Hollywood filmmaking. This isn't "Hollywood" in the cliche, derivative, derogatory sense, but in the "well crafted film with a sizable budget behind it" sense. The opening credits prepare you for exactly what kind of experience you're about to get into. It opens with a score somewhat reminiscent of a Bernard Hermann, 60's style played over sweeping aerial shots of Chicago and the morning train. It's vaguely familiar and comforting, bringing to mind countless classic films. From there you are plunged into a story driven film. Oh yeah. An actual, honest to goodness, well-written plot. Source Code relies on story and acting to drive the film rather than special effects. The effects are used sparsely and only to serve the story, not replace it. What you end up getting is a film that is smart, original, and wildly engrossing. You don't want to miss a second.
Jake Gyllenhaal is utterly fantastic in the lead role. He is a movie star. Every line delivery, or reaction, or nuance fills the screen. He has a larger than life charisma that I just never saw in him before, and it allows him to effortlessly carry this film. The supporting cast is superb as well, with the other stand-out performance by Jeffrey Wright. He plays Dr. Rutledge with all the eccentricities of a monster movie mad scientist. It's definitely a memorable character.
Source Code is directed by Duncan Jones, a relatively new director. With this film he has skyrocketed up my list of up-and-coming directors to watch for. There is no doubt in my mind that very shortly you will hear his name along with the David Finchers and the Christopher Nolans of the world. He is a director that clearly loves good genre films and has seen a great many. That knowledge and passion comes through in his work. As much as I enjoyed his debut feature, Moon, I feel that Source Code is an improvement in every way.
There are specific parts of the plot that I really would like to discuss, but I try to keep these reviews as spoiler-free as possible. It's an incredibly well-written film that is fully realized by Jones. There isn't anything bad about this film. Sure, some people will point out "plot holes" that they feel are so important, but in a film that bends space and time there is always something you can find that is slightly amiss if you look hard enough. I say Source Code is a shining light in modern genre filmmaking. A+
The Good, The Bad, and Franka Potente

Moon is a movie that is best enjoyed knowing as little as possible before viewing. Just know that it is a sci-fi film starring Sam Rockwell and directed by Duncan Jones. It will probably blow your mind a little bit. Seeing that it is Jones' only other film at present it's a good film to have have seen to get up to date with his career.

The link between Source Code and The Day After Tomorrow is Jake Gyllehaal. They are the best and worst performances of his career, and a great example of what happens when special effects drive a movie rather than story...or even logic. It's the beginning of a downward spiral for Roland Emmerich that he still hasn't been able to pull out of. It also stars Dennis Quaid...need I say more?

If you aren't familiar with Run, Lola, Run you should be ashamed of yourself. Break-neck editing, a driving techno score, altered reality, shifts in time and space, and an awesome lead actress make this a movie unlike any other of it's time. It is the definition of a movie paced for the MTV generation yet still succeeds in being a compelling and genius film. Like Source Code it involves a main character who must live through an event again and again until all is made right. Watch this as soon as you can.