The release of Thor this weekend officially kicks off the summer blockbuster season. Of all the titles that Marvel has released in recent years it is fair to say that Thor is one of the lesser known heroes. It also might be the hardest to translate into a cinematic form. In any other comic, the first movie would tell the hero's origin story. The story of Thor however, is totally different. Thor is a god. He doesn't gain his superpower, he is born with it. Trying to reshape Thor to fit more into this "origin story" mold that people are used to seeing causes the movie to feel hollow and unfulfilling, albeit beautifully designed.
Thor (Chris Hemsworth) is kind of a jackass. He is the strongest man in Asgard and the next in line to the throne, and he knows it. His zeal leads him to commit an act that enrages his father, Odin (Anthony Hopkins), and he is banished to earth to live as a mortal. This sets a quest in motion for Thor who, with the help of Dr. Jane Foster (Natalie Portman), must regain his powers, defeat his brother Loki (Tom Hiddelston), and restore order to Asgard. This is a lot of ground to cover in just under two hours, and the movie ends up following a predictable, cookie-cutter formula while taking several shortcuts along the way. The plot simply becomes a game of connect the dots. You touch on a point and immediately move on to the next without digging any deeper, and ultimately you get a full picture. Nothing about the film is confusing because it does hit all of the crucial moments, but it is far from fulfilling. At the end of the film you get an outline for a Thor movie. All of the relevant characters are introduced, you understand what Thor's powers are, and you get a setup for continuing action, but there is no satisfaction in this. Thor is two hours of exposition that ends when the story should kick into second gear.
This isn't to say that the movie is completely a steaming pile. The visual effects are very well done and the CGI locations are extraordinarily well defined. Everything that doesn't take place on earth is so visually compelling that you can forget about the half-baked story and just soak it in. Asgard (especially the rainbow bridge) is perfectly suited for 3D and benefits from the added depth. Like portions of Avatar, it really feels like you're looking through a window into an actual fantasy world. For all of the segments that benefit from the 3D allusion there are just as many that are sullied by it. For example: The Frost Giant world of Jotunheim is a dark and frozen world. A long as the camera is still, it looks as great a desolate, craggy iceberg can. The only problem is that the biggest action sequence in the film takes place here. The quicker cutting, broader movement, and overall faster pace of everything on screen turns this battle into a blur of color and sound. Your eyes just can't process the 3D fast enough to make sense out of much of it. The 3D on display here, much like the movie itself, is just adequate enough to not get the label: "full of suck".
The one overwhelmingly positive aspect to the film, and the aspect that I knew going into it that director Kenneth Branagh would pay closest attention to, are the performances. Although none of the characters other than Loki are given anything even resembling an arc, the actors do the best that they can within the confines of the mediocre script. They, as a whole, have enough charisma to make the archetypal characters (who could have been refererred to as simply "Love Interest", "Comic Relief", "Female Warrior Stronger Than Most Men" "Strong, Silent Guard Who Secretly Sides With The Hero Rather Than The Corrupt Ruler", etc.) entertaining enough to keep the audience interested enough to get through the bad parts (ie: Earth). As Branagh is known as a director of Shakespearean adaptations, the parts of the film that shined the brightest were the scenes between brothers Thor and Loki and the relationship between them. Both actors excel in their roles, even if Hemsworth's Thor never really sees the error of his ways by the end of the film. The triangle of familial conflict between Thor, Loki, and Odin is straight out of Shakespearean context and provides the only emotional weight of the film. If the film were built around this saga rather than the relationship between Thor and Jane Foster, it would have been a much stronger film and a more definite narrative direction than the overextended plot that was actually brought to the screen.
I don't hate Thor, but it is more than mildly disappointing. It is a much better effort than say The Hulk (either version...they were both highly flawed), but nowhere near in the realm of Iron Man. It is a passable introduction to the character but it puts more weight on the upcoming Avengers film to succeed. Once the Avengers saga is complete, the film may seem better in hindsight. As a stand alone flick, however, Thor could have done much more. C+


The Good, The Bad, and Ron Perlman

The only Avengers movie that Marvel has nailed so far is Iron Man. It plays perfectly as a comic book brought to life. It is bright, colorful, funny, and action-packed. All of the characters are larger than life. I remember walking out of the theatre after I saw this thinking it was the best comic book movie ever made. Of course that feeling faded a few months later when Nolan's The Dark Knight was unleashed upon the world and forever changed what a comic book movie can be. I forgot for a while how much I really liked Iron Man because of this. Seeing Iron Man 2 this past summer inspired me to go back and check out the first movie again. It holds up very well and is just as fun as I remembered. It is rightfully the highwater mark that all of the other Avengers films should be measured against, and in doing so, Thor comes up short. 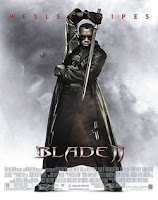 I'm pretty sure The Hulk is the first "bad" entry from an otherwise brilliant filmmaker. With this movie Ang Lee didn't just stumble, he stumbled and fell down 5 flights of stairs. In a career that has produced films like The Ice Storm, Brokeback Mountain, and Crouching Tiger, Hidden Dragon there is no excuse for a misfire like this. The effects were horrible, the story was laughable, and the acting is among the worst the usually solid cast has ever turned out. Lee tried playing to his strengths, putting more focus on the relationships between characters, and lost sight of the fact that he was making a movie about a man who turns green and starts kicking puppies for fun. A pretentious Hulk movie just does not fly.

In trying to find a Marvel Comics movie that was both awesome and overlooked, I kept coming up short. Then it hit me. The Blade franchise is based on a series of comic books, and Blade 2 is much more full of awesome than most people give it credit for. This is the movie that introduced me to the genius of Guillermo del Toro. It took the characters and darker, more serious tone of the first film and turned it all upside-down. It's much more fun and even more action-packed than the original, much like Aliens is to Alien. Blade is joined by an elite group of warrior vampires called "The Blood Pack" to defeat a new race of super-vampires. If you like vampires and/or comic book movies then this film has to be seen. (All titles available on DVD)