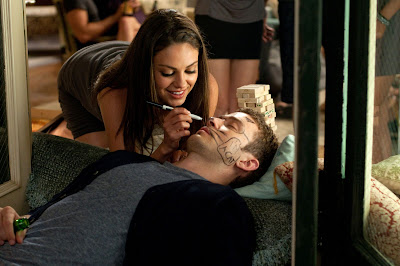 Smack in the middle of a summer without anything resembling a shortage of R-rated comedies, comes the meta chick-flick, Friends With Benefits. Since this genre has been all over the map, ranging everywhere from brilliant to hot garbage, one would be smart to be a little apprehensive going into this movie. Although just as formulaic and predictable as every romantic comedy, having the characters continually shout, "If this was a chick-flick (blank) would happen right now! Good thing we aren't in one of those lame movies! (WINK AT CAMERA)" while at the same time they are unabashedly doing (blank), makes it feel kind of fresh. This tactic saves the movie from collapsing in on itself and makes it an enjoyable rom-com, even if it is a little too self-aware.
The movie opens with a bang, introducing us to main characters who clearly have yet to get a handle on the whole "relationship" thing. Right out of the gate you get a sense for the style of comedy you're about to witness for the next two hours. The dialogue is witty, fast, and more than a little barbed. It kind of comes off as a more fouled-mouthed, far less pretentiously hipster, but just as pop-culture savvy, Juno. This gives the film a comforting feeling. It is designed for a specific audience (of the late twentysomething early thirtysomething variety) and the filmmakers aren't afraid to throw it directly at them. It's hip without being completely drenched in a "This ain't your mom's rom-com!" flavor.
Timberlake's Dylan is an Art Director recruited by Kunis' Jamie to work for GQ. Since Dylan is moving from LA, he doesn't know a soul in NYC other than Jamie. Surprise surprise, the two become fast friends. But that's all. They are simply good friends. One fateful evening, they confide in each other how much they miss sex and how they wish it were simpler and easier to just find a partner. Gears start turning, terms are agreed upon, and, before you know it, casual sex ensues. Everything goes off without a hitch...until it doesn't anymore. Now we have dramatic tension and, therefore, a movie.
The acting from the two leads is definitely above par, and they are genuinely funny. They both have solid comic timing and create believable, if not always sympathetic, characters. Even better then good leads, the movie boasts a noticeable lack of the "close friend" character who is disapproving, quirky, happily in a relationship, or any mixture of the above. Dylan and Jamie are both each others' best friends as well as the will-they won't-they couple at the center of the story. This opens up room for some fresh character interactions while at the same time alleviating a little of the cutesy factor that sometimes cripples these types of films. The only real supporting character in the film is played by Woody Harrelson, which should instantly inform you that the character will be both off-beat and incredibly watchable. If the leads weren't so well suited to their roles, there is a good chance Harrelson would have stolen the show.
Like I said earlier, what separates this from other rom-coms isn't the formula, but the tone and dialogue. It starts off as an odd buddy comedy with hints of a softer side which, at around the halfway mark, switches gears to full blown chick-flick. This switch is the only thing that really holds the film back from being something truly different. After spending so much time ribbing the rom-com genre you would think the writers had devised a clever little scheme to keep the film clear of that territory while still being a satisfying experience. I wouldn't say the movie "sells out" in the end, it just never commits to stepping over the line. It desperately wants to be the Scream of rom-coms, but falls just shy of making it because it can't seem get out of it's own way. Grade: B

There is no denying that, while it does have a fairly original bend, Friends With Benefits has a pretty strong smell of When Harry Met Sally. When Harry Met Sally is a film about two people (the aforementioned Harry and Sally) who move to NYC. Instead of becoming best friends, they immediately go their separate ways...only to become best friends when they meet again years down the road. I like the scenes in both films where the leads just act like buddies. A man and woman engaged in a continuous battle of wit and snarky dialogue. There isn't a burning sexual tension, just two people spending their days together. This allows for some very funny moments in both films. If you like one it's impossible to not like the other.

At one point in Friends With Benefits, Mila Kunis name drops Katherine Heigel. She refers to her more or less as the queen of the disposable chick-flicks the movie constantly rags on. What prompts the name drop specifically is that she is walking past a poster for The Ugly Truth. The Ugly Truth is one of the aforementioned "This ain't your mom's rom-com!" cheese-fests. It's a film that tells you how cool it is by smacking you in the face with a sledgehammer. It tries to pass off abject stupidity as white-hot wit. The only thing this film succeeds in is making a mockery out of it's cast. On the bright side, it did provide some laughs through being ridiculed in Friends With Benefits.

Romantic comedies simply don't get any better than Bringing Up Baby. If you aren't familiar with the works of either Cary Grant or Katherine Hepburn, you should most definitely start here. This is the movie that introduced me to Cary Grant, who is now one of my favorite actors. Grant plays David Huxley, a zoology professor who has just completed his brontosaurus skeleton. Hepburn plays Susan Vance, a woman with money to burn who might also be clinically insane. Fate keeps bringing the two of them together in an increasingly hilarious succession of misadventures that somehow include a leopard named Baby. It's a simple and almost nonsensical sounding set-up, but after 73 years it is still one of the best comedies ever made. It must have gotten something right.