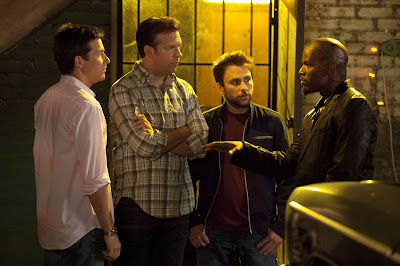 On the surface, Horrible Bosses looks like a movie forged from the same wildly successful template as The Hangover. Upon deeper examination, however, you will still find that your first assumption was absolutely correct. Now the question is: "Why should I see it?". The simplest answer I can offer is that it's funny. Darkly funny. Not quite "Hahaha...Oh my god I'm a bad person" dark, but close enough to appease the demented while not alienating the more wholesome.
We are first introduced to Nick, Kurt, and Dale (Bateman, Sudekis, and Day respectively). They have horrible bosses. Since they can't deal with said bosses or quit their jobs, they come to the only perfectly reasonable conclusion left: they must kill them. This decision sets off a domino effect of misadventures and general hijinx that spirals hilariously out of control. What makes the movie so funny and engrossing in spite of it's color-by-numbers plot are the wickedly fantastic portrayals of the bosses and the slapstick, almost Three Stooges-esque actions of the main characters.
Kevin Spacey is no stranger to playing a horrible boss. His characters in both Glengarry Glen Ross and Swimming With Sharks are legendary. If you take what he brought to both of those roles and crank it up to eleven you still don't come close to what he brings to Horrible Bosses. His Dave Harken not only has an extremely sadistic sense of humor, but he also truly desires to do real harm to people. The character constantly leaves you wondering if he's going to crack wise or crack skulls. As the movie shows, both can be hilarious.
Horrible boss number two is played by Jennifer Anniston. In this surprising turn, she plays a dentist whose consistent sexual harassment and assault isn't just targeted at Dale, but also at her unconscious patients. I promise this is a completely different Anniston than anything you've seen before. The other surprise performance in the film is from Colin Farrell as the coked-out horrible boss number 3. Not surprising that he is an extremely talented actor, but that he has killer comedic chops. There is no way he could have been given enough screen time here. He is devastating every second he is on screen. The character is so completely fleshed out that the slightest mannerism is enough to make you giggle uncontrollably. I don't feel like I'm overselling this at all. Think of What Tom Cruise brought to Tropic Thunder and you'll be in the right ballpark.
As far as the three amigos are concerned, they are lighthearted and "everyman" enough to lend the movie the right amount of absurdity to succeed. You never buy that they are even remotely capable of intentionally doing harm to another person, but are perfectly capable of accidentally killing each other. The way they bumble and pratfall their way through the film keeps it from being taken seriously, even for a second. They are a well-rounded comedic team and I would watch them on a second adventure, but I'm not actively routing for it. I feel like any good comedy should leave you wanting to see more, but that doesn't mean it should happen.
If you look at the comedy spectrum so far this summer, with Bridesmaids at one end and Hangover II on the other. This movie falls somewhere closer to Bridesmaids territory. The acting from the bosses is great and the writing is generally smart enough to make this a worthy outing. This summer doesn't exactly have a dearth of "that was entertaining enough" feeling movies, and unfortunately Horrible Bosses doesn't quite claw it's way out of that heap. If you haven't had your fill yet, give this one a shot. It's definitely worth watching, but isn't the next great comedy. I enjoyed myself enough to recommend it, and I'm usually much more harsh on comedies than any other genre. Grade: B


The Good, The Bad, and The...Hitchcock?

Swimming with Sharks is a slice of indie comedy gold. Kevin Spacey is a high-powered movie producer who vents all of his frustrations on those around him, especially his new assistant, Guy. One day Guy has had enough and decides to get even. A much more resilient comedy than Horrible Bosses, though it does share similar themes. It isn't afraid to go headlong into black comedy territory whereas Horrible Bosses treads lightly. If you're a fan of black comedy or "movies about movies" this deserves your immediate attention.

Seeing how good Jennifer Aniston and Jason Bateman were in Horrible Bosses makes me wonder even more why The Switch was such a horrific movie. Ummm...yeah, that's it. These can't all be mini-masterpieces of wit and wisdom. Sometimes I'm just going to tell you what movies to stay the hell away from. You're welcome.

One thing that stood out to me about Horrible Bosses is, while it took pieces of it's plot from a number of different movies, it isn't afraid to directly cite the movies it borrows from. One of these films is Strangers On a Train. Two men meet on a train. One wants his wife dead, one wants his father dead. One is serious about it and one is not. Aside from Rear Window this might be Hitchcock's best film. Many movies have borrowed the premise but none have been able to replicate it's eeriness.
-Jeremy
jrperry@iamcinephile.com