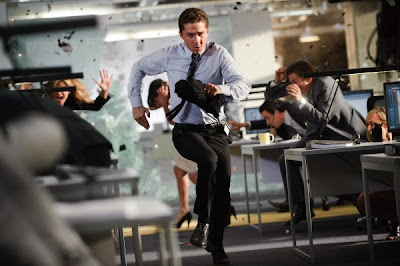 Transformers: Dark of the Moon is the newest entry in Michael Bay's CGI robot battle franchise. But of course you already knew this...unless you've been under a rock for the past four years, in which case I'm glad to see you're well and back among the living. Anyway, the Transformers movies have each had their share of highs and lows, and I would never refer to them as "critical darlings", but they make fine mindless summer entertainment. T3 is two and a half hours of juvenile humor, fast cars, hot chicks, explosions, and disgruntled giant robots who vent their frustrations by causing the aforementioned explosions. It doesn't break the mold but it is clearly directed by a Michael Bay aware of (and affected by) the backlash against Transformers: Revenge of the Fallen, and therefore has a noticeably darker and heavier tone.
The film picks up a few years after the other films left off. Sam (Shia Lebeouf) is out of school, looking for a job, and struggling with the fact that his saving the world has no more impact on his life. He also has a brand-new, incredibly out-of-his-league girlfriend in Carly Spencer (Rosie Huntington-Whiteley). With that established, various things happen that lead the transformers to start fighting each other again and Sam is back in the saddle saving the earth one more time. Other than understanding the simple setup, the plot of the film doesn't really matter and is never given much weight. In this way, T3 is constructed very much like 90's-00's Asian action cinema. The focus of the film is completely on the action sequences and, as logic dictates, there are things that need to happen to move from one enormous brawl to another. The specific motivation doesn't matter as long as the transition between setups is moderately smooth. There is very little character development, plot structure, or nuance to the film to speak of and therefore isn't fullfilling as a work of cinema. It is a film totally devoid of wit or intellectual ideas. This is more or less why the movie loses the majority of critical appeal. I agree with this school of thought. T3 isn't a good movie in a classical sense, but Bay's films tend to not be. This isn't to say I don't enjoy or respect his work though. Love him or hate him, Michael Bay is an artist with a very specific visual style. His mastery of film as a strictly visual medium is what makes his films so commercially successful, and why, when all is said and done, I would call T3 a success.
I don't agree with cutting a film slack for it's shortcomings. I do agree with judging a film based on it's genre though. For a film to receive a good grade it must be technically proficient, hit it's intended mark, and tell a coherent story. T3 isn't going to win any new fans to the series or impress the art film crowd, but it is a technically brilliant movie that connects with it's intended audience. The people in the packed theater I saw the movie in were eating it up. They were laughing, gasping, and applauding. All of them on the edge of their seats...as was I. It is a fun and epic action spectacle. I think my girlfriend described it best. In discussing the film she said, "It felt more like watching a parade than a movie". This is exactly what T3 is. It is a nonstop parade of special effects and 3D imagery and that is all it really aspired to.
Compared to the other two films in the series, T3 is is much more violent and dark. Characters are put in constant danger and as a result they get hurt and even die. This is a bold move for a film that is aimed primarily at teens and older children. Characters that have been with the series from the start, and have been crucial to the story in the past, are violently and graphically murdered and almost instantly forgotten about. This sense of danger put more weight on the already thrilling aciton sequences. When a movie shows you early on that any character is expendable you find yourself more actively involved. This combined with the masterful use of visual effects makes for some of the most satisfying movie action of the series.
The 3D illusion in this film is hands-down the best 3D I have seen. This is the kind of movie 3D is made for. Huge summer spectacles that rely on visuals over character or substance, just like Avatar. The depth that 3D brought to the film makes the audience feel like they're in the battle right along with the Autobots. You have a visceral reaction to the events playing out on the screen like they are really there. That is impressive filmmaking and well worth taking a trip to the theatre for.
Transformers: Dark of the Moon ultimately fails as a work of cinema but succeeds as an all-out assault on the senses. You would be hard-pressed to find a more guns-blazing, rip-snortin', sci-fi action extravaganza this or any other summer. Sure, the running time is a little bloated, and you might feel a like you lost a few brain cells afterward, but if you're a fan of the series this is an absolute must-see. If you aren't already a fan, steer clear. There is nothing here for you and it will only infuriate you that something made completely from color and noise can entertain so many people. Summer will be over in due time and substantial films will return to the box-office. Until then, bring on the explosions. Grade: Pure Eye Candy


The Good, The Bad, and "Did he just throw an Elephant?!"

Although Michael Bay has had a handful of huge missteps in his career (*cough* Pearl Harbor *cough*), I consider myself a fan. Admitting this publicly is almost always followed by looks of bewilderment and/or ridicule. Being a Michael Bay fan isn't even a guilty pleasure. Bay is supremely talented at what he does, and what he does is craft movies out of lightning and bullets. None of his films have been more visually stimulating, consistently funny, insanely over-the-top, and all out awesome as Bad Boys 2. If you are at all a fan of testosterone fueled action movies and you haven't seen Bad Boys 2 you should be pistol whipped. Right from the opening sequence (the one where Will Smith and Martin Lawrence fight the KKK) you know that the movie isn't meant to be taken even remotely seriously. If you need a quick action fix and you can't make it to Transformers, check this out. It'll cure what ails you.

After I saw the trailer for T3 I had a weird feeling that I had seen one of the sequences before. Then I realized what it was. The sequence where the robot snake/worm/mechanized death thinger was crawling it's way up the building looks just like a scene from D-War. Yes, it is a movie about ancient dragons that appear in a modern metropolis and start going berserk. Yes, I knew this and watched it. Yes, it is as bad a movie as it looks. It is definitely a great example to show that a big budget and huge CGI effects do not make an even vaguely entertaining movie, though. There needs to be a competent director behind the camera to make sure the ballet of badassery works as intended. Watch T3 then go watch D-Wars and tell me Michael Bay isn't a special effects wizard.

I mentioned modern Asian action movies in the review and how they are much more about the action sequences than the story. If you aren't familiar with this particular brand of film you should go ahead and check out The Protector to see what I mean. The Protector is the second film from Tony Jaa, made directly after Ong Bak blew the doors off American theatres. It's is 90% action and 10% plot. I've seen the movie a few times, the last being just this past week, and I'm still not really sure what it's about. It has something to do with elephants, Australian cops, and an evil transsexual. I can say with absolute certainty that it contains at least four unbelievably badass fight sequences, one of which is a 5 minute tracking shot following Tony Jaa up multiple floors of a building while reaping wholesale vengeance every step of the way. It is something that must be seen to be believed.
-Jeremy
jrperry@iamcinephile.com
Written by Jeremy R. Perry