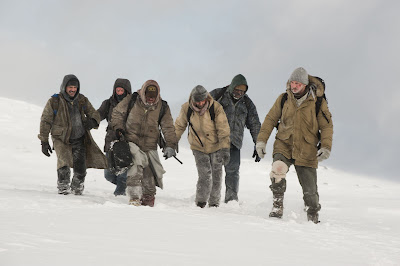 It has to be said: The Grey is the first great film of 2012. It's also the first horrifically mis-marketed movie of the year. Don't get me wrong, the trailer was great. It totally hooked me and got me incredibly excited to see Liam Neeson: Wolfpuncher. Really, what could be more testosterone-pumping than Liam Neeson taping broken bottles to his fists, ready to beat the bejesus out of a pissed-off wolf? The only problem is, The Grey isn't that movie at all.
What it is is a finely constructed character study. The film is about what happens to these men when they become hunted by death and forced to face their own mortality. They all have different wants, and fears, and motivations. Some have the fortitude to look death in the face and fight. Some watch their desire to live shatter before their own eyes. These aren't just placeholder characters set in the woods, waiting to be picked off by ravenous wolves. The film isn't built around "kill sequences" meant to make the audience cheer, or laugh, or gasp. These characters feel like real people. People you come to understand, if even just a little bit. They sit around a campfire, pondering the meaning of life and the fragility of human existence. They try to assuage each others' fears as they themselves sit there trembling. This makes it all the more jarring when sudden bursts of violence abruptly end their lives.
The acting in this movie is astounding. The entire cast does a great job of giving a sense of reality and weight to the situation. As characters develop and change, it never once seems forced. There is a scene later in the film that revolves around one of the men simply losing his desire to continue on. He no longer wants to live. He stops on the side of a stream, looks out over the beautiful, mountainous landscape, and announces his intentions to sit down and die. In the hands of a weaker actor this could play with absolute cheese, but he makes it stone serious. You understand that he knows he will die. He wants to choose his moment and go out on his terms.
Even with a solid ensemble cast, Liam Neeson's Ottway steals the show. He is introduced as a man broken. His life is devoid of anything he once loved. As the events of the film unfold and survival seems more and more unlikely, you see something spark within him. By the end of the film he is a man burning to live, and will do so by any means necessary. You'll be hard pressed to see a stronger performance in the cinema this year.
Among all of the philosophical musings and character building dialogue, there are a handful of sequences that play for thrills. They are spaced out evenly enough that they don't overpower the message of the film, but strong enough to make an impact. The plane crash, in particular, stands as one of the most nerve wracking I've ever seen. This finally brings me to the wolves. The wolves are a huge part of the movie. They represent death. As fast as the men run, they can never escape them. There is nowhere to hide from them. They are omnipresent. They are also the only problem I have with this film. The filmmakers needed a tangible "death" and timber wolves are a great choice, but why do they have to be CGI? Granted, they are the best computer generated wolves (a notoriously shitty CG creature) I've yet to see, but it doesn't mean they don't suck. When the goal of the film is realism, you cannot have an animated antagonist. Most of the time they were out of focus enough or obscured enough that it didn't matter. But every now and then you get a really good look at one and you realize you're in a movie theatre. It doesn't make the movie any less good, it just gets in the way of the experience.
The Grey is fantastic. I don't care how early in the year it is, I'm confident enough that this will be one of my favorite of the year. Get to a theatre to see this one. Grade: A


The Good, The Bad, and MacReady

There isn't a more prefect movie to compare The Grey to than The Edge. The Edge, written by master wordsmith David Mamet, is about a small group of men stranded in the Alaskan wilderness. They soon find themselves hunted mercilessly by a giant Kodiak Bear...which was prominently featured in all advertising for the film. The actual film is less about surviving bear attacks and more about the fine line between the civilized and uncivilized nature of man. Starring Anthony Hopkins, Alec Baldwin, and a strong supporting cast, the acting is also top notch. If you've seen The Edge you get the idea of what to expect in The Grey. If you haven't, you should check it out. It's a fantastic film that is already somewhat forgotten.

Smokin' Aces is an unbelievably painful movie to watch. It's like watching a Tarantino film completely devoid of plot, dialogue, and humor. It's a great idea: A group of hitmen all converge on one target at the same time and all hell breaks loose. I think most of the blame for Smokin' Aces being a shit movie lands squarely on the shoulders of writer/director Joe Carnahan. After seeing The Grey, also directed and co-written by Carnahan, I'm even more confused. He is obviously a highly competent director, which makes me wonder how the hell Smokin' Aces went so far off the rails. Honestly, the movie is terrible. Not a single redeeming quality. I don't care how hip and cool you think the trailer looks, don't give this garbage two hours of your life.

Yes, I've used John Carpenter's The Thing in this spot already. Have you watched it yet? It is linguistically impossible for me to explain to you why this movie is so completely amazing. It's something that has to be seen. It's lightening in a bottle. The perfect storm of casting, direction, writing, and special effects. Real, honest to god, practical special effects. No computer generated bullshit. The movie still succeeds in scaring the pants off of audiences 30 years later because the horrific images that paint the screen actually existed in the real world. The actors physically interact with models dripping with gore. There is something tangible there, even if it's a puppet. Practical effects will always always always trump CGI wolves. Sorry, I got off on a tangent. The real reason why I wanted to include The Thing in this list is because of the atmosphere. Both The Grey and The Thing  capture and convey a freezing, foreboding landscape. You feel cold watching these films. They immediately push you out of your comfort zone and render you unprepared for what will happen next. The magic of cinema.

Email ThisBlogThis!Share to TwitterShare to FacebookShare to Pinterest
Tags: Drama, The Grey, Thriller